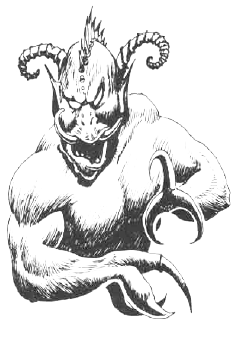 A feathered, thin, orange-yellow visage appears before you, twitching and crawling, its knobby back standing upon two long, multi-jointed legs with clawed feet, waving a long tail. From a conical head adorned with feathers, resting upon a long, thin neck, it sees you with two large, multifaceted metallic eyes, hears you with two large, fan-like ears, smells you with only slits for a nose, and hungers for you with a maw of crushing teeth. The beast reaches out with its winged arms, seeking to tear you apart with cruel, taloned hands.

The hordlings are fiends of varied form, power, and appearance. They have in common hideousness and hatefulness, and roam the reaches of the fiendish planes, preying upon all things, including one another. The strong slay and devour the weak. They sometimes serve under strong leaders like night hags or yugoloths, but are in general untrustworthy, rebellious, and quarrelsome. Three types of hordlings are known to exist—the sinister and morbid soldiers of the Gray Waste of Hades, the brutish and violent thugs of the Tarterian Depths of Carceri, and the insane and murderous lunatics of the Windswept Depths of Pandemonium. All three types can be encountered with some frequency on certain layers of the Abyss as well. To a non-hordling, the differences between these three types are indistinguishable, and they certainly have no tangible effect on their game statistics, yet hordlings immediately recognize hordlings from other planes, and it is for these fellow fiends that their deepest hatreds are reserved.
A few rare artifacts, such as Arodnap's Box and the ruinous Bringer of Doom are linked to the hordlings and can transport them in large numbers to other planes.
Hordlings speak Abyssal, and may know other languages as well.

Combat
Hordlings are combat brutes. They often have special attacks and defenses that augment their skills in a battle, but no hordling has innate spell-like abilities. This immediately sets them apart from most other fiends like demons and devils. A specific hordling's combat tactics must of course be dictated by the nature of its attacks, but in general, these creatures prefer to charge directly into melee and tear into their victims.
A hordling's natural weapons, as well as any weapons it wields, are treated as chaotic-aligned and evil-aligned for the purpose of overcoming damage reduction.